7 Newborn Puppies Rescued from a Foxhole

Gypsy avoided her rescuers for a LONG time.

In September, our rescue partner, “Tracking in the Shadows” received a call about a stray dog sleeping in a field in Elkhart County. Despite their best efforts to catch her, the dog proved herself to be very elusive. She escaped drop nets and moved with lightning speed. All the while, she would smile candidly for motion-activated cameras set up to help locate her.  After a while, she appeared to move on. 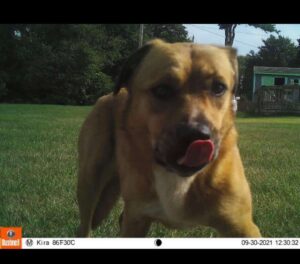 Smiling for the motion-activated camera!

Over the coming months, more calls came in about Gypsy, never in the same place. She was getting her meals from a few different caring neighbors, but she never got too close. By the end of October, her trackers started calling her Gypsy – she was a traveling girl without a care in the world.

A sighting in late November made it clear that Gypsy was pregnant. The urgency to get her to safety increased. Unfortunately, she completely disappeared for 3 weeks. Volunteers spent countless hours searching, handing out flyers, and talking to neighbors. Gypsy eluded them all.

Gypsy would never get too close to her rescuers.

Gypsy’s ‘luck’ ran out in January. “Tracking in the Shadows” received a call that Gypsy had been caught in a leg snare, but otherwise looked healthy. But where were her puppies? Her rescuers picked her up at 10pm and spent a frigid January night trying to get Gypsy to lead them to her babies. It took all night. Eventually, Gypsy led them to a small foxhole. Her seven puppies were inside – miraculously still alive!

But there was one problem – the puppies were 20ft underground, and the earth was frozen solid. No one could reach them but her.

Rescuers started digging with shovels, but quickly realized it would take days to reach the depth of the puppies. It took a good Samaritan’s tractor and several hours to dig them out!

Now, Gypsy and her puppies are recovering in the warmth and love of “Tracking in the Shadows” shelter. They won’t be ready to leave mom for a few weeks but will be looking for the perfect home after that!

Pet Friendly Services of Indiana impacts the lives of thousands of animals each year, and will fund the spay/neuter surgeries of Gypsy and her puppies. This will make Gypsy adoption ready and ensure this is her last litter, breaking the cycle for future generations.

You can help dogs like Gypsy and her puppies with a donation to Pet Friendly Services.

Your support allows us to say “Yes” when we receive special requests for help!

With the support of SurveyHero.com we are able to create mobile ready online surveys.